As I write to you each and every week, I’m consistently reminded of the many avenues I may travel down when sharing useful ideas and news with you. This week, my news feed is throbbing with a new police shooting, presidential candidates twisting, bending, and outright disregarding the truth, financial markets bending under continued interest rate pressure, even the breakup of Brangelina. When I consider these stories and wonder how to turn them into something useful for you and your financial security…I…I just can’t. I just need a break from all of this pain, all of this tragedy, all of this insanity.

So…I’d like to share a chipmunk story with you. It has nothing to do with retirement planning, I assure you.

The other day, our family and some of the kids’ friends were hanging out at our house, enjoying not having anything on our calendar that day. Without any warning, one of our cats came through his computer chip-enabled cat door, carrying a chipmunk in his mouth. This cat, Teddy, is the nicest cat you’ll meet, and he’s a ruthless and calculating killer of small animals. He’s brought us victims ranging from big rabbits, to mice, squirrels, birds, he does not discriminate. If it’s moving and on his turf, it’s fair game for Teddy. We’ve rescued many an animal from his attacks, but we simply cannot keep up with his full hunting agenda (Yes, we’ve tried locking him in the house.)

On this day, the chipmunk he brought us was very much alive. When we saw what he was up to, somebody screamed. Teddy responded by dropping the chipmunk into our living room. What happened next was every bit of a National Lampoons Christmas Vacation squirrel-in-the-Christmas-Tree scene. Kids were screaming, Carie was screaming, I was screaming, as the chipmunk did everything it could to escape the three cats that were now in pursuit of it. We literally had kids standing on top of the kitchen table, while the terrified animal found its way under a couch and eventually into a room where the kids have toys and gymnastics equipment (this detail will matter in a moment). 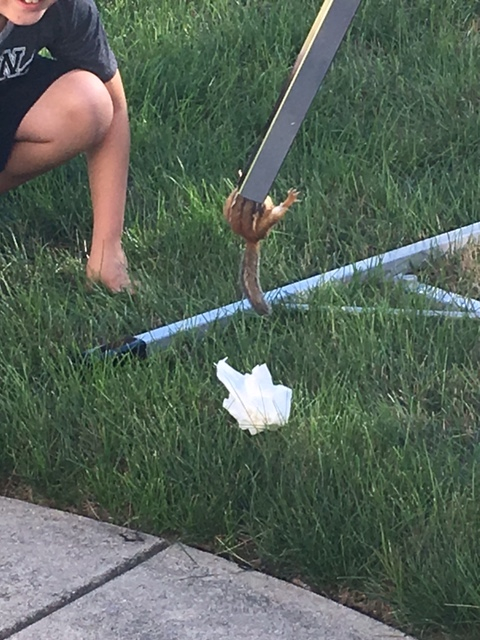 In order to properly assess the situation and develop a strategy, I needed a reprieve from some of the screaming. I picked up Evelyn, one of the screaming twins, and took her out to their playset fort and placed her high above the ground, where I thought she’d be safe from the endangered animal. Evelyn did not appreciate being left alone in the backyard, so I ran back out to her, carried her into the garage and placed her in the minivan that was parked in the garage. With her finally comfortable, I headed back into the chaos and joined Carie and the others who had watched the chipmunk scurry across the wood floor and into the metal pole of a gymnastics apparatus.

Being the quick thinkers that we are (ha!), we grabbed paper towels and stuffed them into the end of the pole, keeping the chipmunk safe from the cats, and contained in a way that allowed us to carry the entire apparatus out into the front yard where we planned to release the chipmunk to the wild. It was a prefect plan, except…

The chipmunk, it turned out, was now stuck in the pole, unable to free himself. Since Carie grew up on a farm, and I did not, she was selected to attempt to free the animal by whatever means necessary. Doing what any normal person would do, she gently pulled its tail to free it from the pole. At the risk of offending an animal rights activist, let’s just say that didn’t work out as we’d hoped. We needed another plan.

I suggested either an air compressor or a shop vac. If we can’t pull him out, let’s either push him out or suck him out, right? Carie, thankfully, had gentler plans. She wrapped a heavy drinking straw in paper towels and was able to insert the straw into one of the adjustment holes of the pole and gently push him out of the pole. With just a few nudges, he was free. He’d live to fight another day.

In case you’re wondering, we do have the end of this saga on video if you’d care to watch. It’s weird. For now, enjoy this photo of the best and worst day this chipmunk may have ever experienced.

May your weekend be as joyous as the chipmunk’s, but without the chaos and screaming.