A Holiday Gift for Everyone

This article is offered by one of our money managers, Global Financial Private Capital. It does such a nice job of cutting through the clutter that it simply needed to be shared with you.

As we enter into what’s considered to be the most festive time of the year, it’s likely that many of us will be attending at least one or two holiday parties in the coming weeks.

A rather common source of small talk at such occasions involves the stock market. More specifically, there seems to be three subjects of conversation involving equities that dominate such discussions:
1. How well you and others performed in 2014
2. Where the equity market is heading in 2015
3. Why the world is going to end

1. The first conversation point is rather popular with those investors who have hit a big homerun this year by betting heavily in areas of the market that pose far greater risk than they may realize. They have amazingly forgotten the pain of 2008 because greed has infected their logic and reasoning.

When encountered with these personalities, I recommend that you toast to their success, smile and then walk away. Those in retirement simply must focus more on the risk rather than the return because recessions do happen and bubbles do burst. Aiming for consistent returns is the goal.

2. The second conversation point is nothing more than a contest to see whose prediction will be the most accurate, much like discussing who will win the next World Series. While forecasting market movements is not inherently dangerous, your investment plan should be designed to span several years, so take any and all predictions with a grain of salt.

NOTE: Although yearly forecasts are rarely accurate, deriving expected returns is an important function of any disciplined investment process. The exercise forces an investor to analyze and map the drivers of a given asset class, which can help confirm or disprove a broader investment thesis.

3. The third conversation point is the liveliest, because invariably there’s always someone at a holiday party who is convinced that the world is doomed. They believe that the U.S. dollar will collapse, or the debt in our country will turn us into the next Argentina, or that the equity market is rigged (thanks to Michael Lewis), or that Ebola is the next bubonic plague. The list is seemingly endless.

Most of these conspiracy theories are born on the Internet and are then nurtured by mainstream media with no real oversight, because both parties can claim “independence” in their reporting. Therefore, these fear mongers are not going anywhere anytime soon, so it’s up to us to ignore them.

As a result, my gift to you this holiday season is the table below, which is a compilation of data points that disprove many popular “doom and gloom” theories out there today. Memorize these fun facts and share it with your loved ones, so that they also avoid the vortex of fear and panic that can cripple a nest egg.

The bottom line is that you should ignore both the greed that drives so many who truly believe that the market can only go up in the short-term, and the fear that keeps others up at night over events that will most likely not happen in any of our lifetimes. Instead, stay somewhere in the middle by removing emotion from your portfolio and continue to aim for consistent and realistic returns. 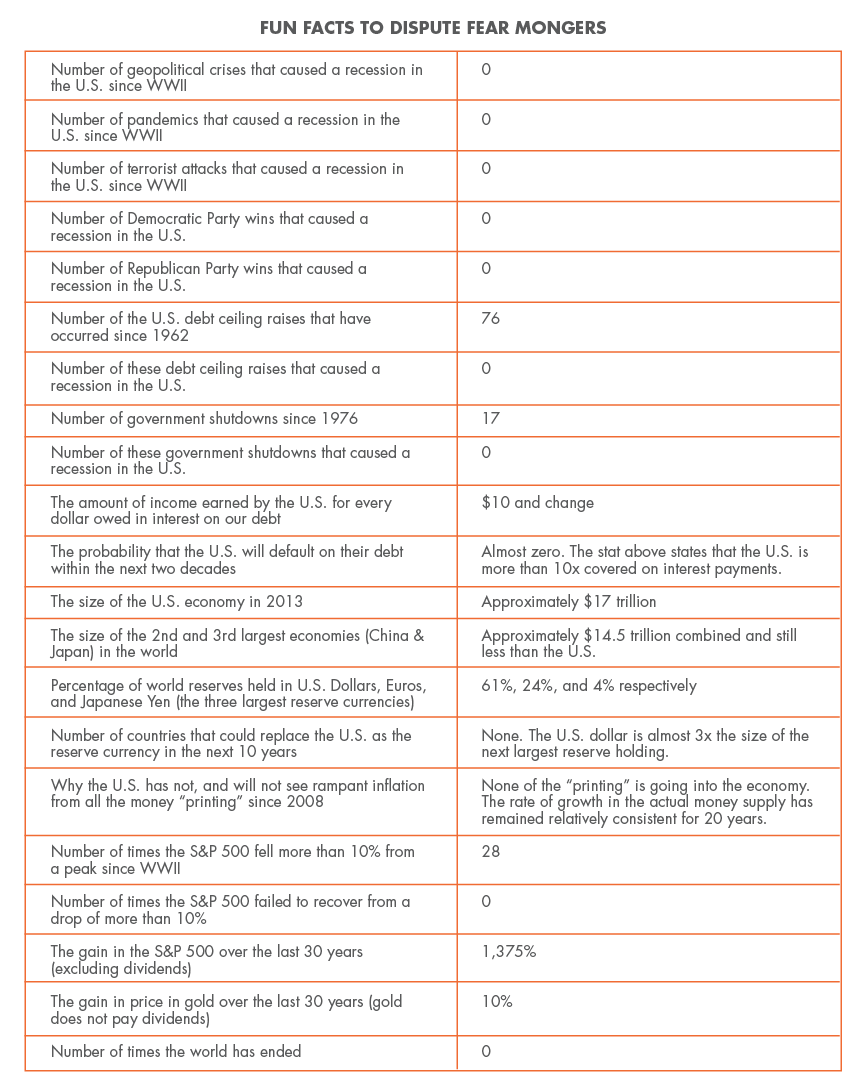